Companies lose money if meetings aren't efficient and productive. The only way to keep on top of this, is to collect feedback and identify improvements.

Managers know that meeting feedback is important, but it's not always easy to collect. Feedback can be vague and unhelpful, or it can be so specific that it's difficult to take action on. In this blog post, we'll discuss a few tips for collecting feedback that's both useful and actionable. By following these tips, you'll be able to improve your meetings and make them more productive for everyone involved!

wHY SHOULD YOU COLLECT MEETING FEEDBACK?

Before you start collecting feedback, it's important to understand why you want to collect it in the first place. Are you looking for ways to improve the meeting itself, or are you trying to figure out how well your team is performing? Different types of feedback will be more useful depending on your goals.

How to Collect Meeting Feedback 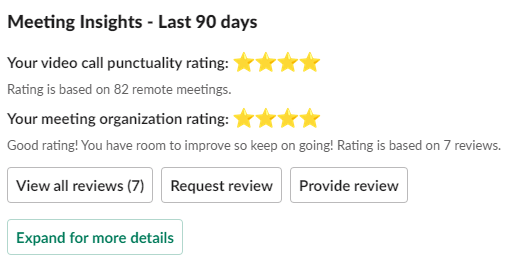 Collecting meeting feedback can be a challenge, but it's important to do if you want to improve your meetings. Here are a few tips for collecting feedback that's both useful and actionable:

Make sure the questions are clear and concise. Don't ask leading questions or make assumptions about what people think. Be specific about what you want feedback on.

Don't forget to follow up. After you've collected feedback, make sure you actually do something with it! Follow up with people who gave feedback to make sure their suggestions were taken into account. 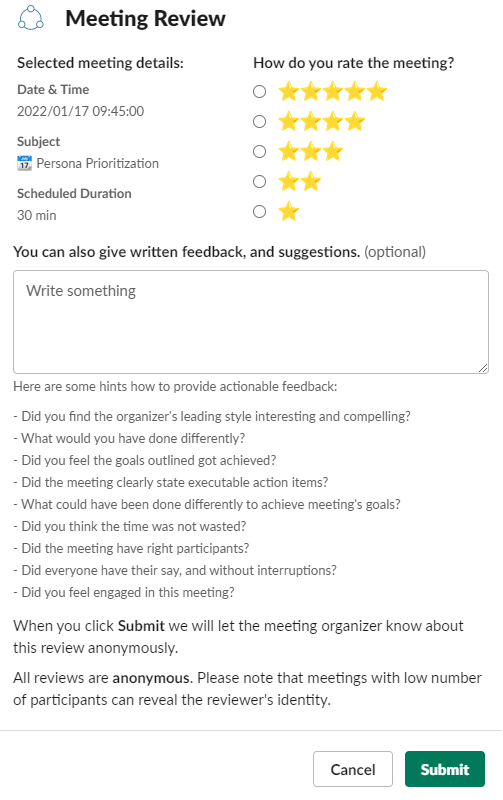 Make sure the questions on the form are clear and concise, and make sure there's a space for people to write in their own comments. You may also want to include some demographic information (such as job title or department) so that you can see if any patterns emerge.

Ask participants to give feedback about the meeting within 24 hours of the end of the meeting. This will help ensure that they have a clear recollection of what happened.

Make sure to ask specific questions about the meeting, such as how well it was organized, how effectively people participated, and whether decisions were made.

Once you've collected feedback, it's important to follow up with those who gave it. This will show that you're taking their suggestions seriously and that you value their input.

Follow up with respondents within one week of receiving their feedback. Thank them for their time and let them know what actions were taken in response to their suggestions.

Trends to Look for In Meeting Feedback

By collecting meeting feedback, you can start to see patterns in how well your meetings are performing. Here are a few trends to look for:

By looking for these trends, you can start to identify areas where your meetings could use some improvement. 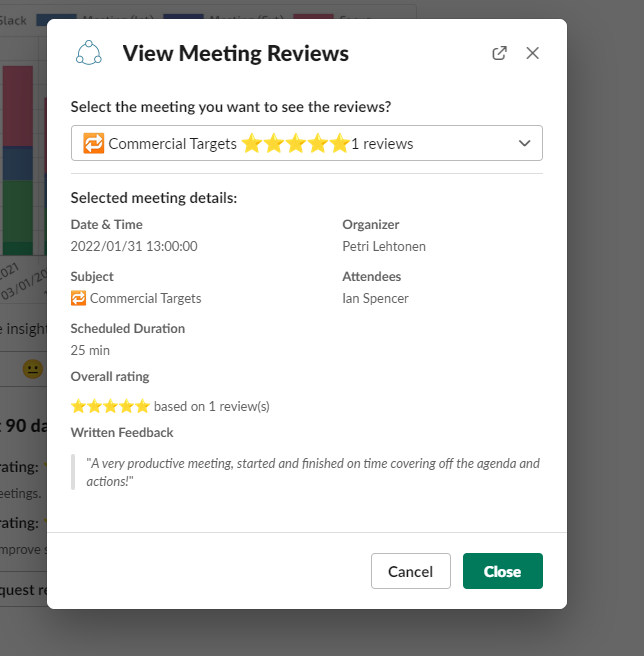 If you're responsible for organising a large meeting - or if you're simply attending one - it's important to collect feedback after the meeting has ended. This will help you understand how well the meeting went and identify any areas that need improvement.

Collecting feedback can be difficult when there are hundreds of people involved, but there are a few ways to make it easier:

Use online survey tools like SurveyMonkey or Google Forms to collect feedback from all participants simultaneously.

Distribute a paper questionnaire at the end of the meeting and ask people to return it within 24 hours.

Send out an email survey after the meeting has ended. Make sure to include a space for comments so that people can provide more detailed feedback.

One challenge that can arise in any meeting is when one or more participants are not on time. This can disrupt the flow of the meeting and impact its effectiveness. Meetings that start on time are more productive and allow everyone to have their say. However, not only must they start on time, but they must also have a structured and well-planned agenda.

Punctuality for meetings is an important standard for any meeting, but even more so for large meetings. Attendees that are late in large meetings can have a huge impact financially on the company. Just from meetings starting 5 minutes late every week, it could lead to the company losing thousands. It is actually estimated that $37 billion is lost every year, with punctuality being partly to blame.

In order for a meeting to start on time, the agenda must be well-planned and everyone involved should be familiar with it. If there are any changes to the agenda, they should be announced before the meeting starts.

If you're looking for a way to collect automatic punctuality feedback, or anonymous meeting feedback that's both concise and actionable, Flowtrace may be the solution for you. Flowtrace is a meeting culture analysis and improvement tool that helps you understand how people are interacting during meetings. Read more about our meeting culture solution from here.

Flowtrace also includes a built-in feedback form so that you can collect feedback from participants after the meeting has ended. This feedback can help you identify areas where the meeting could be improved.

Collecting meeting feedback is an important part of organising and participating in meetings. By using the right tools and asking the right questions, you can collect feedback that's both concise and actionable.  And by following up with respondents, you can show that you're taking their suggestions seriously and value their input.

Slack channel statistics are lacking the detail you need to improve your team's collaboration in public channels. Flowtrace gives you the metrics you...

Use our analytics to improve the punctuality of your Zoom meetings. Flowtrace has a built-in punctuality rating score to help teams improve...

Discover Peoplelogic alternative where we will take a look at Flowtrace VS Peoplelogic to compare both products and how they suit your needs.